As I mentioned in class, the varied use of focal lengths is another technique that Scorcese manipulates, even in the same scenes. This is in addition to the heavy use of handheld camerawork, which itself was not widely used except in news and documentary filmmaking.

I mentioned that the scene with Alice and Tommy in the motel room in Phoenix contains shots with two very different focal lengths. One is a wide angle lens, which distorts the image to expand the distance between objects on the left and right of the frame. The other shot uses a telephoto lens, which distorts the image to compress the space between foreground and background objects. 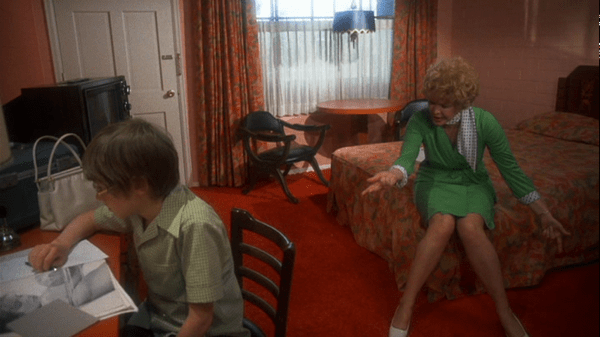 The image above is the wide-angle shot, where Tommy on the left appears very distant from Alice on the right. This might have been used to visually represent the distance between the two of them as they fight. In the very same scene, there’s the telephoto shot. Here, they have (somewhat) reconciled as Alice reassures Tommy that she will find a job and that things will (somehow) be okay. The telephoto lens compresses the space between Tommy, Tommy’s reflection, and Alice’s reflection. The framing is of course also interesting as it uses a mirror to put Tommy and her in the same plane and within a common frame.

It’s a rough but touching moment between mother and son.

This entry was posted in Film, Film Industry, Lectures. Bookmark the permalink.